The AR15 rifle with a flat top upper receiver is capable of accepting a wide variety of optical sights. In its role as a combat rifle, red dot sights are the most popular as they allow for rapid target acquisition. Red dot sights are made by a multitude of companies ranging from low quality imports for under $100 to models costing close to $1000. Some of the more popular designs in this category include the EO Tech and the Aimpoint models.

While there are a host of other sights to choose from, each of these companies has produced a variety of models that have seen extensive usage with the US Military for the past 10 years. Although similar in overall concept, the implementation of each design provides each model with its own set of advantages and disadvantages.

EO Tech is a company based in Ann Arbor, Michigan, which is known for manufacturing holographic sights. A holographic sight uses a laser to generate and project a reticle into the user’s line of sight.  The reticle is projected by means of a hologram onto the glass in the sight's prism. The EO Tech sight is said to be completely free of parallax regardless of distance or viewing angle. Parallax refers to an error by which the scope’s reticle appears to move in comparison to the target when the user moves his head behind the sight in a lateral direction: either up and down or left to right 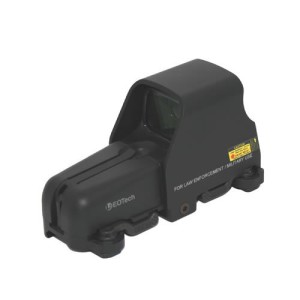 The concept of the holographic sight was first developed by Bushnell in the early 1990s. EO Tech acquired the rights to this model and made some improvements for durability and military use including what it refers to as a “roll bar” surrounding the unit to protect the sight from damage. The most popular model is the original EO Tech 553. EO Tech sights which have had their glass damaged by gunfire were found to still work apart from the shattered view. In the US Military’s inventory system, the EO Tech 553 sight is known as the SU-231/PEQ. The model is available in either a flat matte black or a desert tan color for camouflage.

This sight runs on either one or two batteries depending upon the model. Single battery sights have a battery life of close to 600 hours, whereas the two-battery version can run for 1000 hours. EO Tech sights have an integral mount that can attach to a Picatinny or Weaver rail. The reticle display of the EO Tech allows the shooter to maintain his peripheral vision and keep both eyes open while shooting as opposed to using a scope with a tube. The company maintains that the sight is visible to 300 yards on target and a magnifier with a "flip to the side" mount is available to engage targets at longer distances. The EO Tech sight is fully compatible with night vision devices as well.

EO Tech has recently begun offering both sights in a single unit known as the EO Tech MPO III. The MPO III combines a short single battery operated EXPS2 holographic sight with a G23 3X magnifier in a single unit which has quick-release throw levers on the mount for ease of installation and removal. The base for this unit requires less than 3 inches of rail space on the top of the AR15’s receiver.

Jumping on the ever popular “Zombie “ bandwagon, the company’s latest offering is a holographic site which features a reticle shaped like the international biohazard logo. The company has hinted that additional custom reticle displays may be available in the future.

Burris is a US optics manufacturing company which produces scopes and sights for civilian, police and military use. The Burris Prism utilizes an illuminated reticle and low power settings to make this a viable close range optic. The multi-coated lenses and a 1.5” sun shade help on reducing glare in both directions and make the Burris Prism ideal for use as a hunting scope as well as a tactical optic.

A bullet drop compensator on the 3X model allows this close range optic to be a contender at ranges out to 500 yards.

Without a doubt, the top of the line of tactical scopes are those made by Trijicon and the ACOG is the pinnacle of this class. The name is an acronym for Advanced Combat Optical Gunsight and is used by military units throughout the world. It is not a CQB type optic, but excels at battlefield ranges between 200 and 500 yards. ACOG sights utilize radioactive tritium in their construction to be usable at night time. During the day the reticle on most ACOGs is lit by a fiber optic module. The reticle can resemble a triangle, horseshoe, chevron, dot or traditional crosshair and can be had in green, red or amber.

Shooting with an ACOG takes some getting used to as the shooter must keep both eyes open as an optical illusion is created when lining up the reticle with the target. Once mastered, it can be the most accurate optic to field on an AR15. For close range shooting, some models have rudimentary sights formed in the body of the ACOG and displayed on the top of the scope. Other models have an option to mount a smaller red dot sight such as Trijicon’s RMR as a viable option. It is not ideal for close quarter battle but is sufficient enough to provide some necessary value.

These scopes represent some of the many different options in a tactical sight for an AR 15 rifle and set the standards which other scopes should strive to meet for this platform.