Find the Best AR 15 Lower Receiver on the Market

The AR15 rifle was first designed by Armalite in the 1950s to pursue a US Military contract for a new service rifle to replace the M14. Facing bankruptcy, the company sold the design to Colt’s Manufacturing Corporation who went on to provide a select fire version for the US Military designated as the M16, which eventually leads to creating the best Ar 15 lower receiver.

Later, Colt retrojected the AR15 rifle into their lineup as a semi automatic only version intended for civilians. The design of the bolt carrier was changed and the lower receiver had a few modifications, notably a hinged front pivot pin, the lack of a third hole in the fire control group to accept the automatic sear and a two position selector lever that pivoted between “safe” and “fire” as opposed to the military’s three-position safety.

While some companies push out mere clones of their competitors’ product, others strive to bring something different to the table with their offerings.

The lower receiver is the serial numbered part which makes the AR-15 a firearm and with very few exceptions is the only part that requires shipping and receiving through a Federal Firearms Licensee (FFL). Most of the best AR 15 lower receiver available look extremely similar to one another, leading to the misconception that all are manufactured by a few entities in the industry.

In addition to the rifle’s serial number, the lower receiver contains the magazine well, fire control group (hammer, trigger, sear and safety), buffer tube, stock and the bolt catch. Lower receivers may be had either stripped or complete. There is even an option for “less complete” versions for the ultimate “do-it-yourself” project.

The Best AR 15 Lower Receiver: Top Products In The Business

Spike’s Tactical produces AR-15 lower receivers for consumers and law enforcement and was one of the first companies to cater to the growing NFA oriented segment of the shooting public. Spike’s machines their receivers from a mil-spec aluminum forging with an anodized finish to resist wear and tear from the elements. The magazine well is engraved with Spike’s spider logo and the caliber designation: “Multi” to allow shooters to adopt any caliber within reason.

One of the more recent manufacturers specializing in custom AR15 lower receivers is Seekins Precision. This lower receiver features a textured magazine well front to allow the shooter to use it for stability instead of the hand guards. Completely designed with the tactical shooter in mind, this completely mil-spec lower receiver known as the SP223 is worth the extra cost.

The SP223 lower receiver includes an oversized trigger guard for use with gloves and the best part of all is Seekins’ use of screws as opposed to roll pins to complete the build, which results in less potential damage to the receiver during assembly and is a vast improvement over every lower receiver on the market.

CMMG has been manufacturing quality lower receivers and complete rifles for a number of years and specializes in calibers other than 5.56 NATO.  Their 9mm lower receiver is machined from a billet of T-6 aluminum and accepts all mil-spec parts, but requires the use of a 9mm buffer spring. The magazine well accepts Colt 9mm magazines but may be modified to use Uzi 9mm magazines as well.

Technically this lower receiver may not be for an AR15, but it is worthy of mentioning due to the surging interest in this type of rifle chambered in 308 Winchester.  In some circles it is known as the older and bigger brother to the AR15: the AR10, whose name is trademarked by Armalite. As it is intended for a larger caliber than 5.56 NATO with a longer cartridge case, some changes had to be made to the lower receiver, including the provision for a longer magazine well.

Besides that, the receiver accepts all the parts of an AR15 lower receiver parts kit and a few modifications have been made to make the installation easier such as threading the bolt catch instead of using a roll pin and relocating the rear take down detent to beneath the pistol grip as opposed to behind the butt stock in a position that begs for a crushed spring and lost takedown detent, unless you have three hands.

As for upper receivers to fit this model, they must be chambered in 308 Winchester. Larger caliber AR15 upper receivers intended as single shot rifles in 50 BMG or 338 Lapua will not fit on this version, either.

As mentioned previous, most AR15 lower receivers transfer the same as a complete firearm with few exceptions. That exception is the 80% lower receiver. This is an aluminum forging that has 80% of the final work done to it. The buyer must complete the remaining from drilling the hammer and trigger pins to milling or cutting out the section for the fire control group. 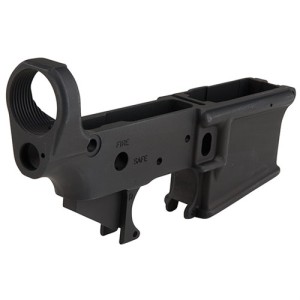 When it is complete, the buyer may need to serialize and register it depending upon their city and state of residence. It is the buyer’s responsibility to comply with federal, state and local firearms laws.

Tips to Consider When Shopping for the Best AR 15 Lower Receiver:

Now that we have the significant factors covered when it comes to finding the best AR lower receiver, it's time to talk about a few smaller things to consider. Most of these features probably will not directly impact the function of the weapon, but the details can determine the quality. It is good to know what your options are when you're purchasing something expensive. With something like choosing material and style, you are determining how much you will love using your AR 15 lower receiver for the time to come.

Consider the Style of Your Lower Receiver:

The sibling of the forged style, the billet style, is much harder to create. Therefore, it involves a lot of time and artistry, which is what allows this style to be much more expensive in nature. Here is a summary of the process in basic terms: First of all, the metal is carved from one full-size billet block into the shape of a lower receiver. This in itself is incredible craftsmanship.

The billet style merchandise is weaker when out hold it up against the forged style. Nevertheless, it is still strong enough to maintain the recoils of your rifle with ease and grace.

In contrast to the billet is the forged style. This one is the most common type of receiver you can purchase. So what does the forged process entail? It starts when the hot material of choice is formed and pounded into the general shape of the lower receiver. The thing that makes it durable is the heat it gets after this process.

After that, the finishing method involves changes and modifications like the drilling of holes, smoothening of edges, extra layers of paint and finishing, and various forms of engravings.  Once the weapon is forged, it should be durable and top quality. This forging process makes the strongest of all the receivers.

Military designations require for there to be a unique hardcoat finish on all receivers. This kind of finish gives several benefits, some of which are the prevention of corrosion, decay, and scratch protection.

The method entails immersing the lower receiver in a sulfuric acid bath while using an electrical current at the same time. During this process, an even layer of aluminum oxide lays on the surface.

This necessary process is very similar to standard anodizing, but the fundamental difference is that the hardcoat required version presents an exterior that is more resistant and has a smoother and harder finish.

There are plenty of other finishes available to you out there for you to choose from. These other coatings are robust, well done, and offer a variety of colors. The anodizing processes generally only come in black. No matter which finishes you decide on, it should be constantly layered and have a beautiful finish.

The way your lower receiver looks might not be the first thing you think of, but aesthetics have a significant impact on how much you savor any major purchase, and that includes your weapon. We all want things that look nice, don't we? There are a few essential things to consider when you are choosing how the best AR 15 lower receiver will look in your possession.

First of all, the type of receiver you pick will play a big part in determining how it looks. The majority of forged lower receiver types out there will usually look similar. But keep in mind that billet lowers can look very different since the manufacturing process gives tons of room for artistic and creative design.

Next, let's take a look at branding and logos. Though a lot of lower receivers are produced in the same place and are made with similar materials and are of similar qualities, the engraving on the side can be very tasteful or very ugly depending on what your taste is. The logo can make or break your like or dislike of even the best AR 15 lower receiver.

At the end of the day, considering all the factors of aesthetics, it is crucial that you pick a lower receiver that is stylistically good for your taste.

Though this material is not as strong as aluminum, the polymer material is very tough and long-lasting. The highest qualities of polymer that make it common in weapons are that it is light, cheap, and easy to produce. Some other things are that this material can resist scratches and shocks from the strong recoils that happen when the weapon is shot off.

Since polymer material is less durable than aluminum, it is a lot easier to create because there won’t be much resistance. It is true that many constructed products have polymer used in their creation so modifications and the leftover parts of the assembly are easy because this material is adjustable.

The most regularly used material in creating lower receivers is aluminum. Why is this material so beloved? It is mainly because it is outfitted with strong and superior protection from corrosion.

The cost essentially differs depending on the type of material that was used and the style that was created. For instance, the process of creating an aluminum billet is a lot more expensive compared to the forged style because the billet style takes a lot of energy and time. On the other hand, aluminum material costs more than polymer because aluminum is stronger.

Taking all this into consideration, choosing the type and style of material you will use is determined by your personal preference and budget. Nevertheless, you shouldn’t be reluctant to get a good quality product because, at the end of the day, the performance of your Ar 15 lower receiver is the most important thing.

There are a number of choices when it comes to a lower receiver depending upon how much work the buyer wishes to put into their build. From complete lower receivers with all parts including the butt stock installed to 80% lowers that require a degree of milling, drilling and final finishing before installing a lower receiver parts kit. There is even a raw forging available which requires an inordinate amount of work for the hobbyist to complete.

It cannot be said that there are little to no options when it comes to choosing The Best AR 15 Lower Receiver for an AR15 project.