Introduced in 2007 by Hornady, the 6.5 Creedmoor cartridge had a slow start, appearing in rifle shooting competitions, and gained recognition for its low recoil (significantly so, compared to other cartridges in its category). This was seen as risky by some because 6.5mm cartridges were not really considered seriously by most shooters in the United States.

Ironically, 6.5mm cartridges have long existed in the European market, but weren’t as popular in America because of the lack of availability and interest, since American shooters were already used to the .308s and .264s.

As had been witnessed before, some great 6.5mm cartridges that were in the market — the 6.5 Remington Magnum, and the .264 Winchester Magnum (to name a few), didn’t do so well in the gun market. So it is a pleasant surprise for the manufacturers that the shooting world is finally sitting up and take notice of this “new” and “hot” cartridge. 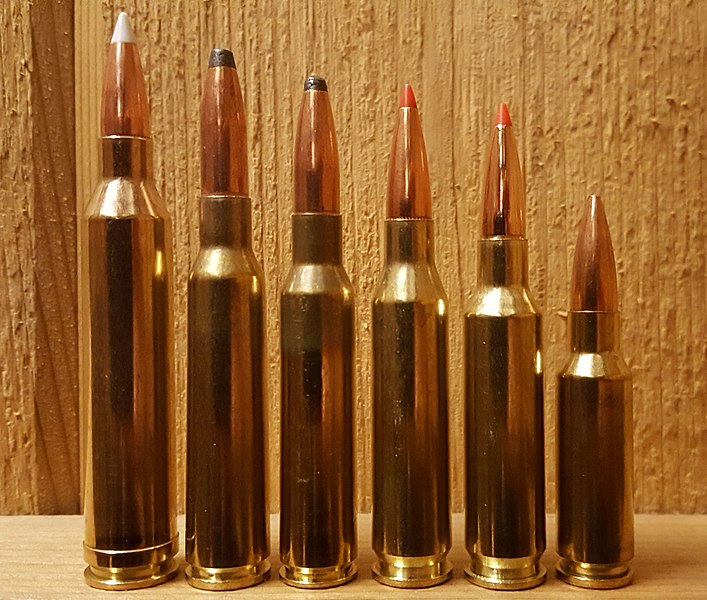 One would think a lot of years would have gone into the development of the 6.5 Creedmoor. But how it came about is actually an interesting story. The cartridge was born out of a discussion between a top-notch shooter (Dennis DeMille) and his ballistician friend (Dave Emary, Hornady) at a championship. The two friends were discussing the shortcomings of the modern-day rounds, and were ‘shooting’ ideas back and forth.

The discussion was about how the current cartridges in the market were not up to the mark and were causing dissatisfaction among shooters for their below average performance.

Emary was convinced and started work on the new cartridge when he went back. The year was 2005. After a few back-and-forth sessions, the new cartridge was launched as the 6.5 Creedmoor at a show in 2007. Then, no one had realized the popularity that the new entrant would gain among not only competition shooters, but big/small game hunters because of its superior ballistics, easy availability and competitive pricing.

The 6.5mm is not a new round. It has been around for the last 125 plus years by the Norwegian and Swedish armies. Years later, competitive shooters would discover this accurate and powerful round which offered lesser recoil over other calibers, and hence a new market came to exist.

The 6.5 Creedmoor provides excellent ballistics for a cartridge considering it is a long range in mind. Apart from its low recoil feature, the 6.5 Creedmoor offers wind deflection: the great ballistic coefficient makes short work of slip air resistance, making it carry most of its power towards the target.

Some long-range shooting enthusiasts have reported shooting a milk jug from a distance of as long as 1 mile! This may seem too far-fetched, but anything close to this is also hugely impressive! Several magazines and shooters have held tests comparing the 6.5 Creedmoor to the .243 and the .308 Winchester, and have found that the 6.5 Creedmooralways performs better than the two.

The Creedmoor has outperformed most of its counterparts and it has found that not only does it perform admirably when it comes to wind drift, it also has less recoil, making it much easier to shoot. Many shooters have noted that the .308 does not perform well at distances over 700 yards, though it still remains a top choice.

Because of its shorter length (2.85 inches), it can be chambered for short rifles and those with the AR-10 rifle with no problem at all. Countless other custom gun manufacturers have also followed suit and are producing rifles chambered for this cartridge. The one reason being touted for this superior performance that the Creedmoor has less taper than its counterparts.

What’s more, is that Hornaday doesn’t just stop at factory-produced cartridges. Each 6.5 Creedmoor box comes with a recipe to make your own cartridge, for those who like to make their own by hand. The company also offers up to 10 loads for the cartridge.

The great thing about the Creedmoor’s less recoil is that shooters can consistently find their target in the viewfinder quickly. That is an application that the United States military is looking at and we will be covering it later in this article.

Also, less recoil, in this case, doesn’t mean less power. In comparison, it has been found that the Creedmoor follows the .308’s trajectory almost identically. If one was to summarize the Creedmoor’s performance in a word, it would be “efficient”.

Let’s take a look at how the Creedmoor has perform against its immediate competitor, the Winchester .308:

The Creedmoor wins easily. Though the Winchester may pack more punch, its recoil as explaine as somewhat excessive, whereas with the Creedmoor, it has been one of its selling points.

The Creedmoor shoots flatter and has (less) better wind handling. Also, it has been found to be accurate nearly every time, in particular, from a distance.

The ammunition and weapons available in Creedmoor are more expensive when compared with the Winchester in similar categories. This could be a downside for many. But the plus here is that the Creedmoor is abundantly available!

Guns That Chamber the 6.5 Creedmoor

Naturally, with the Creedmoor’s rising popularity, gun manufacturers took notice and started chambering some of their rifles with this caliber. We are listing some of these below for you:

Ruger was one of the first manufacturers to chamber guns for the Creedmoor. Available in seven different calibers, the Hawkeye FTW Hunter is a gun for the left-handed and is a bolt-action hunting rifle. It comes in a threaded barrel and holds a capacity of 4 rounds. The rifle has a wooden stock and offers ease in cleaning and durability.

Made by a manufacturer that specializes in AR models, this product offers excellent quality and rugged good looks. It comes with a removable box magazine and the muzzle comes threaded for a suppressor.

This weapon comes in a polymer stock and offers a satin steel barrel finish and an adjustable trigger. It holds a capacity of 4 rounds and a detachable magazine for easy and quick loading. The suggested use ranges from varmint to predators and deer.

The M&P 10 offers a 10-round clip (+1), has a two-stage match trigger, is semi-automatic and ambidextrous so both right and left-handed shooters will be comfortable with it. This is an AR-type rifle that will perform equally well while hunting or in competitive shooting as well as personal defense.

This bolt-action rifle offers a 5-round capacity, adjustable trigger and comes in matte black color. This rifle is for the left-handed and has a sleek design and has a tactical look and feel. The buttstock is shock absorbing and the muzzle comes threaded with a protector.

The Creedmoor’s pricing is competitive and is available at a price range of $28 - $32 for a box of 20 (at a price of about $1.60 per round). Buying these in larger boxes greatly reduces the price (some websites have priced it as low as 70 cents per round).

​What Is This Being Used For?

As we know by now, the Creedmoor started its life as ammunition for precision-rifle shooters. It had a slow start, but quickly gained popularity through word-of-mouth and suddenly everyone wanted a rifle chambered in Creedmoor 6.5.

With a round like the Creedmoor, long-range shooting feels like a breeze, even for the novice, because fewer adjustments have to be made to the gun.

Long-time shooters have argued that .260 Remington and the 6.55 Creedmoor almost run side by side when compared. But the fact is, that where the .20 Remington lacks, the Creedmoor excels. In the shooting world, the Remington has been well known, whereas comparatively, the Creedmoor is a late entrant.

People who have just entered competitive shooting will find it much easier to adapt to the long range, low recoil Creedmoor when compared with the already existing .308 Winchester and the Remington. As a result, hunters were quick to note the many benefits of switching to the Creedmoor. The other two have been popular with those who reload their own.

More recently, the Creedmoor has come neck to neck with the .308 in big game hunting in North America, owing to its all-around flatter trajectory and less recoil. These species include:

As a result, manufacturers have started producing 6.5 Creedmoor ammunition in the “big game flavor” as well.  Though typically not considered the “hunting caliber”, hunters have reported excellent results while shooting big game with these Creedmoor variants. Many hunters have claimed to drop big game over a large distance with the Creedmoor, and there are glowing commendations on various blogs on the internet.

In a previous article, we had briefly discussed how the United States military is looking to replace its main rifle, the M16, and is looking for a replacement weapon and as a result, looking at new ammunition as well.

Not surprisingly, the popularity of the Creedmoor has not escaped the army. The first thing that comes to mind when you wonder why this “upstart” is even being considered by the military, is probably its long range. The second thing that pops up is, of course, the reduced recoil.

More recently, the United States Special Operations Command has switched to the 6.5 Creedmoor, replacing their more standard, 7.62mm ammunition. There are also talks that the army is also looking for a new gun to go with this ammunition.

Tests concluded by SOCOM officials in 2017 demonstrated that the Creedmoor had a much longer effective range than the existing 7.62mm round, reduced recoil and wind drift. SOCOM has been known for moving with the times and keeping in touch with advancements in modern warfare. The casing on both the Creedmoor and the 7.62 is the same, so it essentially means that in case it comes to a conversion, only the barrel needs to be changed because both rounds use the same magazine. This will save costs, and most importantly, time.

For those looking for precision shooting, the 6.5 Creedmoor has a ballistic advantage over the .308 and hence it performs better. For those who spend a long time at the shooting range, this cartridge is recommended because of its low recoil and in general opinion, a fair price for the experience.

Out of the shooting range and if you decide to go hunting, this is a good alternative to other available options. Hunters across the spectrum have given their verdict and it is proven that the Creedmoor can take out a target at 500 yards.

The biggest advantage? What is not to like about the 6.5 Creedmoor when you can use it both for hunting and at the range, use it in other modern firearms, it does not falter at long ranges and offers much less recoil than other options available in the same category! Also, the rifles chambered in the Creedmoor are easy to shoot.

The battle between the 6.5 Creedmoor and its counterparts is far from over, but one thing is clear — the Creedmoor is here to stay for a long, long time.